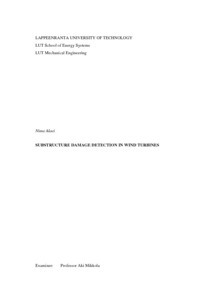 In recent years applying identification techniques to damage detection problems has received a lot of attention. Especially in structural dynamics, detecting defects is important in order to ensure the integrity of critical components. One of the challenges in damage detection procedures is that many of them are sophisticated and their implementation on large and complex systems, exhibiting numerous degrees of freedom (DOF), is computational intensive.
In this study, substructuring methodology is employed in order to reduce the required processing time for damage detection in the presence of high number of DOFs. In the proposed method, the structural model is separated into several subcomponents (also called substructures). Then the damaged substructure is identified by estimation of loads at its interface. In the next step, observations of a few DOFs are utilized to efficiently localize the defect. Since the number of observations is limited in practice, a modified Kalman estimator with global weight iteration is employed to extract information meaningful for the damage evaluation from a small set of sensors. In our approach, the Kalman filter is set up to estimate the coefficients of the substructure structural matrices such that, comparing with the nominal matrix, damage can be easily detected and localized.
A finite element model (FEM) of a beam is first is taken as an example of a mechanical assembly in order to investigate the computational efficiency of the method. Then, as a more complicated example, FEM of a 600W wind turbine rotor assembly is considered. The time response of the wind turbine is taken as simulated experiment and processed with the proposed method in order to evaluate the effect of measurement errors on the detection performance. The detection robustness and efficiency of the proposed method has been validated with the correct values.