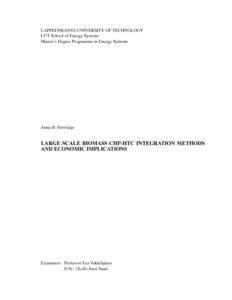 This thesis investigates the integration possibilities for a 430 MWth combined heat and power (CHP) plant and an industrial scale continuous hydrothermal carbonization (HTC) reactor. HTC is a biomass upgrading process that produces a valuable coal-replacement product, “hydrochar,” with increased energy density, hydrophobicity, and grindability. Steady state simulations of the two processes in their stand-alone operation were developed in IPSEpro, and subsequently combined in two different integration schemes. Fluctuations in load and weather conditions were accounted for by modeling eight discreet load points. The objectives of this study were to assess the advantages of each integration case in terms of operability, economic performance, and scale-up potential.

The two integration schemes primarily differed in their methods for recovering heat from the HTC wastewater to the CHP cycle. The resulting efficiencies of producing heat, power, and hydrochar were comparable between the two cases. Both schemes simplified the HTC process components, reduced boiler fuel intake, and thus performed with higher trigeneration efficiencies than parallel operation of the stand-alone CHP and HTC plants.

Primary operational differences between the integrates occurred in annual electricity generation and wastewater production. Wastewater treatment capacity was found to have a large impact on the capital costs of the integrated system, with the lowest waste- producing integrate also having the lowest capital cost. However, the case with the highest electricity production accumulated the largest annual cash flow. Changing the hydrochar production capacity ultimately did not change which integration method was more profitable. However, the more complex integration scheme, which had a lower annual cash flow in both scales, exhibited favorable scaling behavior due to an increase in electricity production, resulting in the largest improvement in profit upon scale-up.