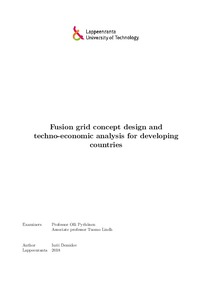 This Master's thesis work discuss the issues of concept creation and low voltage (LV) network design of off-grid where connectivity is integrated to the very same power system. The work considers implementation of different design approaches of the PV based off-grid distribution system to real grid topologies in rural distant areas in developing markets in Sub-Saharan Africa. Network topology is based on geographical analysis of housing in selected villages of regions of Namibia. Namibia is one of the African country where access to electricity is an issue to be solved.
Only 43% of population has access to electricity in Sub-Saharan Africa countries. This percentage goes rapidly down if we are talking about rural areas (15%). Most of existing systems are typically either of two types: 1) solar house systems (SHS) - typically its power doesn't exceed 100 Watts and supply is individual consumer or 2) solar charging systems; (SCS) – it can have power rating up to 15 kilowatts and is aimed as a rule to phone charging. However, these systems are not intendent connectivity provision, uninterrupted and power supply with good quality. In order to guarantee such options there is a need to design an off-grid power system, where each consumer is connected to the common grid, which is sourced by PV power plant and backed up by battery storage system and where area of supplied grid is covered by wireless Internet connection.
The main object of the work is to design the most optimal system configuration solution from techno-economic point of view. The main emphasis is on uninterrupted power supply, provision of connectivity and high quality electricity to each consumers and cost efficiency of designed system. Fusion off-grid system is one possible solution for this issue. This work considers different approaches to design of such grid, varying battery types, voltage type, voltage level (within LV limits), power cabling configuration, number of power energy source etc. Perspective of off-grid interconnection and integration with utility grid is also taken into account.
Designed off-grid system consists of PV array, battery storage, inverter or converter, depending on voltage type, transformers in some cases and power cabling part. It includes core initial system configuration, network development and power energy decentralization stages. The first step presupposes grid supplying connectivity source and basic load. The second comprises implementation of network part to the off-grid. Three different topologies are considered, which are: dense rural, scattered rural and dense city grid. There are DC bipolar distribution configuration, which presupposes usage up to three voltage levels, European 230 VAC [IEC 60038, IEC 50160, CENELEC HD 472 S1, assuming one or three phase and up to two voltage levels, and American 120 VAC [ANSI C84.1-1989], implying two voltage levels. In addition to configuration comparison, consumers’ capacity rise is also take into account. The last stage contains analysis of impact of decentralized generation to the total system cost. Topologies from the previous stage is considered. Therefore, in this work from techno-economic point of view the most optimal methodology of Fusion off-grid development and configuration is defined.