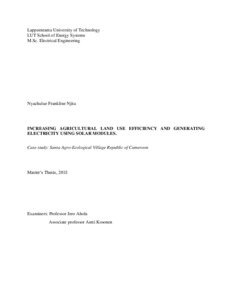 Contains research methodology, HOMER software used for the simulation of solar production and calculating components cost for the project as discussed in this research document (2.557Mb)
Lataukset:

The continuous rise in electricity demand across the globe has been a major source of carbon dioxide (CO2) emissions and other gases such as greenhouse gases (GHGs) resulting from the excessive use of crude oil and fossil fuels by energy sectors for many decades. Because of the environmental and ecological problems that burning fossil fuels to generate electricity have caused rapidly, most governments through the United Nations Organization efforts to ensure sustainable communities, nature preservation, CO2 mitigation and the reduction of global warming also led to the adoption of a goal to ensure affordable and clean energy for all.

However, a renewable energy resource such as solar has vast global potentials to support the future needs of energy through sustainable conversion technology like photovoltaics systems. Solar energy optimization is a reliable and efficient step towards increasing the share of renewable energy in the energy mix of most nations, especially in regions with high solar irradiation due to favorable climatic conditions and adequate annual sunshine hours. However, solar energy has some disadvantages such as difficulties in balancing production and consumption, which then requires batteries for energy storage. In addition, some regions may periodically have poor solar irradiation due to changes in weather conditions.

In this thesis, a solar powered system for a farmer in the Santa village in northwest region Cameroon was, studied and designed to meet his socio-economic goals. With the aim to increase his agricultural land use efficiency by providing enough shading using solar panels, on a piece of dry and hot crop land often affected by excess sunshine, and to generate electricity for daily farm use including the keeping of poultry and to power agricultural machinery. In addition to sell electricity to surrounding residents as an alternative source of income generated from his solar farm in which the crops, fruits and vegetables are cultivated beneath the solar panels in a system called agro-photovoltaics (APV). The APV also aims to create jobs, improving the socio-economic standard of living for people in this region and to boost up annual food production to meet the financial needs of the farmer.