Exploring institutional drivers and barriers of the circular economy : A cross-regional comparison of China, the US, and Europe 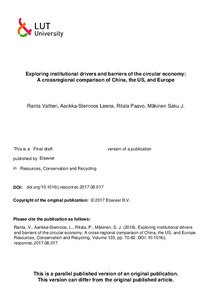 The Circular Economy (CE) has been identified as a sustainable alternative to the current linear economic model. Thus far, research on the circular economy has focused on methods for better conserving the value in material flows. As the CE is currently being adopted as a sustainable development strategy in, e.g., China and the EU, identifying and comparing the drivers of and barriers to CE implementation would be beneficial for the acceleration of the development path. To contribute toward this research area, we built on institutional theory via a multiple case study covering China, the US, and Europe. We analyzed each region as an institutional environment and considered manufacturer and integrator types of value chain actors due to their central role in CE implementation. As our key findings, we identified that the general drivers of the CE from each institutional environment support recycling as the primary CE action, while support for other CE types appears to be lacking. Regulatory measures have primarily driven increased recycling efforts on both the integrator and manufacturer sides. Similarly, identified normative indicators overwhelmingly point toward recycling, while increasing reuse faces cultural-cognitive barriers. Between regions, China differs due to its informal sector and strong regulative institutional support. We conclude that to improve institutional support for the CE and allow it to fulfill its potential as a sustainable growth model, diversified institutional support for reducing the products produced and materials used as well as increasing reuse are needed.