Distributed Energy Production in the North-West Region of Russia 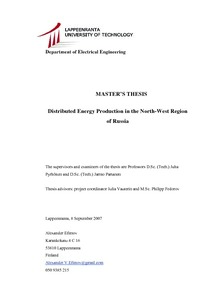 The energy system of Russia is the world's fourth largest measured by installed power.
The largest are that of the the United States of America, China and Japan. After 1990,
the electricity consumption decreased as a result of the Russian industry crisis. The
vivid economic growth during the latest few years explains the new increase in the
demand for energy resources within the State. In 2005 the consumption of electricity
achieved the maximum level of 1990 and continues to growth. In the 1980's, the
renewal of power facilities was already very slow and practically stopped in the 1990's.
At present, the energy system can be very much characterized as outdated, inefficient
and uneconomic because of the old equipment, non-effective structure and large losses
in the transmission lines. The aim of Russia's energy reform, which was started in
2001, is to achieve a market based energy policy by 2011. This would thus remove the
significantly state-controlled monopoly in Russia's energy policy. The reform will
stimulateto decrease losses, improve the energy system and employ energy-saving
technologies. The Russian energy system today is still based on the use of fossil fuels,
and it almost totally ignores the efficient use of renewable sources such as wind, solar,
small hydro and biomass, despite of their significant resources in Russia.
The main target of this project is to consider opportunities to apply renewable energy
production in the North-West Federal Region of Russia to partly solve the above
mentioned problems in the energy system.