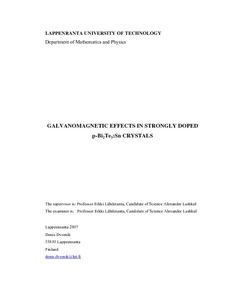 Magnetic field dependencies of Hall coefficient and magnetoresistivity are investigated in
classical and quantizing magnetic fields in p-Bi2Te3 crystals heavily doped with Sn grown
by Czochralsky method. Magnetic field was parallel to the trigonal axis C3. Shubnikov-de
Haas effect and quantum oscillations of the Hall coefficient were measured at
temperatures 4.2 K and 11 K. On the basis of the magnetic field dependence of the Hall
coefficient a method of estimation of the Hall factor and Hall mobility using the Drabble-
Wolf six ellipsoid model is proposed. Shubnikov-de Haas effect and quantum oscillations
of the Hall coefficient were observed at 4.2 K and 11 K. New evidence for the existence
of the narrow band of Sn impurity states was shown. This band is partly filled by
electrons and it is overlapping with the valence states of the light holes. Parameters of the
impurity states, their energy ESn - 15 meV, band broadening ¿<< k0T and localization
radius of the impuritystate R - 30 Å were obtained.