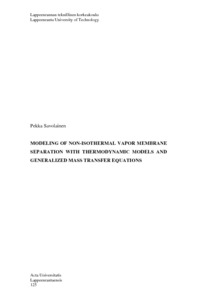 A rigorous unit operation model is developed for vapor membrane separation. The new model is able to describe temperature, pressure, and concentration dependent permeation as wellreal fluid effects in vapor and gas separation with hydrocarbon selective rubbery polymeric membranes. The permeation through the membrane is described by a separate treatment of sorption and diffusion within the membrane. The chemical engineering thermodynamics is used to describe the equilibrium sorption of vapors and gases in rubbery membranes with equation of state models for polymeric systems. Also a new modification of the UNIFAC model is proposed for this purpose. Various thermodynamic models are extensively compared in order to verify the models' ability to predict and correlate experimental vapor-liquid equilibrium data. The penetrant transport through the selective layer of the membrane is described with the generalized Maxwell-Stefan equations, which are able to account for thebulk flux contribution as well as the diffusive coupling effect. A method is described to compute and correlate binary penetrant¿membrane diffusion coefficients from the experimental permeability coefficients at different temperatures and pressures. A fluid flow model for spiral-wound modules is derived from the conservation equation of mass, momentum, and energy. The conservation equations are presented in a discretized form by using the control volume approach. A combination of the permeation model and the fluid flow model yields the desired rigorous model for vapor membrane separation. The model is implemented into an inhouse process simulator and so vapor membrane separation may be evaluated as an integralpart of a process flowsheet.