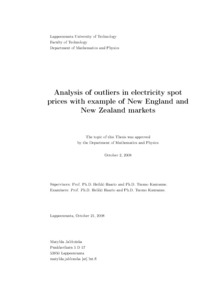 Electricity spot prices have always been a demanding data set for time series analysis, mostly because of the non-storability of electricity. This feature, making electric power unlike the other commodities, causes outstanding price spikes. Moreover, the last several years in financial world seem to show that ’spiky’ behaviour of time series is no longer an exception, but rather a regular phenomenon. The purpose of this paper is to seek patterns and relations within electricity price outliers and verify how they affect the overall statistics of the data. For the study techniques like classical Box-Jenkins approach, series DFT smoothing and GARCH models are used. The results obtained for two geographically different price series show that patterns in outliers’ occurrence are not straightforward. Additionally, there seems to be no rule that would predict the appearance of a spike from volatility, while the reverse effect is quite prominent. It is concluded that spikes cannot be predicted based only on the price series; probably some geographical and meteorological variables need to be included in modeling.