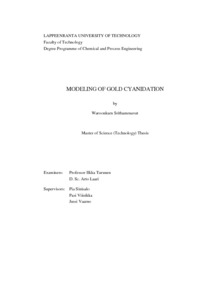 The chemistry of gold dissolution in alkaline cyanide solution has continually received attention and new rate equations expressing the gold leaching are still developed. The effect of leaching parameters on gold gold cyanidation is studied in this work in order to optimize the leaching process. A gold leaching model, based on the well-known shrinking-core model, is presented in this work. It is proposed that the reaction takes place at the reacting particle surface which is continuously reduced as the reaction proceeds. The model parameters are estimated by comparing experimental data and simulations. The experimental data used in this work was obtained from Ling et al. (1996) and de Andrade Lima and Hodouin (2005). Two different rate equations, where the unreacted amount of gold is considered in one equation, are investigated. In this work, it is presented that the reaction at the surface is the rate controlling step since there is no internal diffusion limitation. The model considering the effect of non-reacting gold shows that the reaction orders are consistent with the experimental observations reported by Ling et al. (1996) and de Andrade Lima and Hodouin (2005). However, it should be noted that the model obtained in this work is based on assumptions of no side reactions, no solid-liquid mass transfer resistances and no effect from temperature.