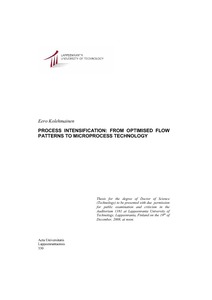 This thesis is focused on process intensification. Several significant problems and applications of this theme are covered. Process intensification is nowadays one of the most popular trends in chemical engineering and attempts have been made to develop a general, systematic methodology for intensification. This seems, however, to be very difficult, because intensified processes are often based on creativity and novel ideas. Monolith reactors and microreactors are successful examples of process intensification. They are usually multichannel devices in which a proper feed technique is important for creating even fluid distribution into the channels. Two different feed techniques were tested for monoliths. In the first technique a shower method was implemented by means of perforated plates. The second technique was a dispersion method using static mixers. Both techniques offered stable operation and uniform fluid distribution. The dispersion method enabled a wider operational range in terms of liquid superficial velocity. Using dispersion method, a volumetric gas-liquid mass transfer coefficient of 2 s-1 was reached. Flow patterns play a significant role in terms of the mixing performance of micromixers. Although the geometry of a T-mixer is simple, channel configurations and dimensions had a clear effect on mixing efficiency. The flow in the microchannel was laminar, but the formation of vortices promoted mixing in micro T-mixers. The generation of vortices was dependent on the channel dimensions, configurations and flow rate. Microreactors offer a high ratio of surface area to volume. Surface forces and interactions between fluids and surfaces are, therefore, often dominant factors. In certain cases, the interactions can be effectively utilised. Different wetting properties of solid materials (PTFE and stainless steel) were applied in the separation of immiscible liquid phases. A micro-scale plate coalescer with hydrophilic and hydrophobic surfaces was used for the continuous separation of organic and aqueous phases. Complete phase separation occurred in less than 20 seconds, whereas the separation time by settling exceeded 30 min. Fluid flows can be also intensified in suitable conditions. By adding certain additives into turbulent fluid flow, it was possible to reduce friction (drag) by 40 %. Drag reduction decreases frictional pressure drop in pipelines which leads to remarkable energy savings and decreases the size or number of pumping facilities required, e.g., in oil transport pipes. Process intensification enables operation often under more optimal conditions. The consequent cost savings from reduced use of raw materials and reduced waste lead to greater economic benefits in processing.