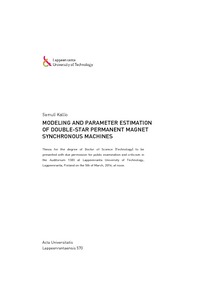 The power rating of wind turbines is constantly increasing; however, keeping the voltage rating at
the low-voltage level results in high kilo-ampere currents. An alternative for increasing the power
levels without raising the voltage level is provided by multiphase machines. Multiphase machines
are used for instance in ship propulsion systems, aerospace applications, electric vehicles, and in
other high-power applications including wind energy conversion systems.
A machine model in an appropriate reference frame is required in order to design an efficient
control for the electric drive. Modeling of multiphase machines poses a challenge because of the
mutual couplings between the phases. Mutual couplings degrade the drive performance unless
they are properly considered. In certain multiphase machines there is also a problem of high current
harmonics, which are easily generated because of the small current path impedance of the
harmonic components. However, multiphase machines provide special characteristics compared
with the three-phase counterparts: Multiphase machines have a better fault tolerance, and are thus
more robust. In addition, the controlled power can be divided among more inverter legs by increasing
the number of phases. Moreover, the torque pulsation can be decreased and the harmonic
frequency of the torque ripple increased by an appropriate multiphase configuration. By increasing
the number of phases it is also possible to obtain more torque per RMS ampere for the same
volume, and thus, increase the power density.
In this doctoral thesis, a decoupled d–q model of double-star permanent-magnet (PM) synchronous
machines is derived based on the inductance matrix diagonalization. The double-star machine is
a special type of multiphase machines. Its armature consists of two three-phase winding sets, which are commonly displaced by 30 electrical degrees. In this study, the displacement angle
between the sets is considered a parameter. The diagonalization of the inductance matrix results
in a simplified model structure, in which the mutual couplings between the reference frames are
eliminated. Moreover, the current harmonics are mapped into a reference frame, in which they can
be easily controlled. The work also presents methods to determine the machine inductances by a
finite-element analysis and by voltage-source inverters on-site.
The derived model is validated by experimental results obtained with an example double-star interior
PM (IPM) synchronous machine having the sets displaced by 30 electrical degrees. The
derived transformation, and consequently, the decoupled d–q machine model, are shown to model
the behavior of an actual machine with an acceptable accuracy. Thus, the proposed model is suitable
to be used for the model-based control design of electric drives consisting of double-star IPM
synchronous machines.