Modified nano- and microcellulose based adsorption materials in water treatment 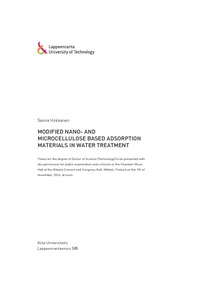 In recent decades, industrial activity growth and increasing water usage worldwide have led to the release of various pollutants, such as toxic heavy metals and nutrients, into the aquatic environment. Modified nanocellulose and microcellulose-based adsorption materials have the potential to remove these contaminants from aqueous solutions. The present research consisted of the preparation of five different nano/microcellulose-based adsorbents, their characterization, the study of adsorption kinetics and isotherms, the determination of adsorption mechanisms, and an evaluation of adsorbents’ regeneration properties.
The same well known reactions and modification methods that were used for modifying conventional cellulose also worked for microfibrillated cellulose (MFC). The use of succinic anhydride modified mercerized nanocellulose, and aminosilane and hydroxyapatite modified nanostructured MFC for the removal of heavy metals from aqueous solutions exhibited promising results. Aminosilane, epoxy and hydroxyapatite modified MFC could be used as a promising alternative for H2S removal from aqueous solutions. In addition, new knowledge about the adsorption properties of carbonated hydroxyapatite modified MFC as multifunctional adsorbent for the removal of both cations and anions ions from water was obtained. The maghemite nanoparticles (Fe3O4) modified MFC was found to be a highly promising adsorbent for the removal of As(V) from aqueous solutions due to its magnetic properties, high surface area, and high adsorption capacity .
The maximum removal efficiencies of each adsorbent were studied in batch mode. The results of adsorption kinetics indicated very fast removal rates for all the studied pollutants. Modeling of adsorption isotherms and adsorption kinetics using various theoretical models provided information about the adsorbent’s surface properties and the adsorption mechanisms. This knowledge is important for instance, in designing water treatment units/plants. Furthermore, the correspondence between the theory behind the model and properties of the adsorbent as well as adsorption mechanisms were also discussed. On the whole, both the experimental results and theoretical considerations supported the potential applicability of the studied nano/microcellulose-based adsorbents in water treatment applications.