Testing FCM technique for the wind energy scenarios in Finland 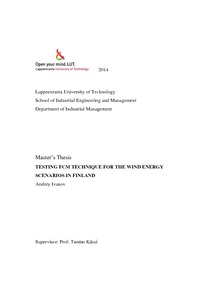 In the latter days, human activities constantly increase greenhouse gases emissions in the atmosphere, which has a direct impact on a global climate warming. Finland as European Union member, developed national structural plan to promote renewable energy generation, pursuing the aspects of Directive 2009/28/EC and put it on the sharepoint. Finland is on a way of enhancing national security of energy supply, increasing diversity of the energy mix. There are plenty significant objectives to develop onshore and offshore wind energy generation in country for a next few decades, as well as another renewable energy sources. To predict the future changes, there are a lot of scenario methods developed and adapted to energy industry.
The Master’s thesis explored “Fuzzy cognitive maps” approach in scenarios developing, which captures expert’s knowledge in a graphical manner and using these captures for a raw scenarios testing and refinement. There were prospects of Finnish wind energy development for the year of 2030 considered, with aid of FCM technique. Five positive raw scenarios were developed and three of them tested against integrated expert’s map of knowledge, using graphical simulation. The study provides robust scenarios out of the preliminary defined, as outcome, assuming the impact of results, taken after simulation. The thesis was conducted in such way, that there will be possibilities to use existing knowledge captures from expert panel, to test and deploy different sets of scenarios regarding to Finnish wind energy development.