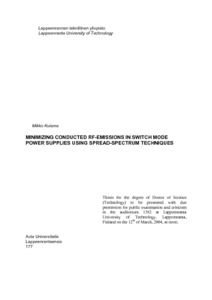 Switching power supplies are usually implemented with a control circuitry that uses constant clock frequency turning the power semiconductor switches on and off. A drawback of this customary operating principle is that the switching frequency and harmonic frequencies are present in both the conducted and radiated EMI spectrum of the power converter. Various variable-frequency techniques have been introduced during the last decade to overcome the EMC problem.
The main objective of this study was to compare the EMI and steady-state performance of a switch mode power supply with different spread-spectrum/variable-frequency methods. Another goal was to find out suitable tools for the variable-frequency EMI analysis. This thesis can be divided into three main parts: Firstly, some aspects of spectral estimation and measurement are presented. Secondly, selected spread spectrum generation techniques are presented with simulations and background information. Finally, simulations and prototype measurements from the EMC and the steady-state performance are carried out in the last part of this work.
Combination of the autocorrelation function, the Welch spectrum estimate and the spectrogram were used as a substitute for ordinary Fourier methods in the EMC analysis. It was also shown that the switching function can be used in preliminary EMC analysis of a SMPS and the spectrum and autocorrelation sequence of a switching function correlates with the final EMI spectrum.
This work is based on numerous simulations and measurements made with the prototype. All these simulations and measurements are made with the boost DC/DC converter. Four different variable-frequency modulation techniques in six different configurations were analyzed and the EMI performance was compared to the constant frequency operation. Output voltage and input current waveforms were also analyzed in time domain to see the effect of the spread spectrum operation on these quantities.
According to the results presented in this work, spread spectrum modulation can be utilized in power converter for EMI mitigation. The results from steady-state voltage measurements show, that the variable-frequency operation of the SMPS has effect on the voltage ripple, but the ripple measured from the prototype is still acceptable in some applications. Both current and voltage ripple can be controlled with proper main circuit and controller design.