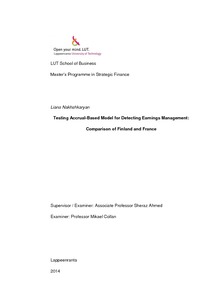 The aim of this study is to test the accrual-based model suggested by Dechow et al. (1995) in order to detect and compare earnings management practices in Finnish and French companies.
Also the impact of financial crisis of 2008 on earnings management behavior in these countries is tested by dividing the whole time period of 2003-2012 into two sub-periods: pre-crisis (2003-2008) and post-crisis (2009-2012).
Results support the idea that companies in both countries have significant earnings management practices. During the post-crisis period companies in Finland show income inflating practices, while in France the opposite tendency is noticed (income deflating) during the same period.
Results of the assumption that managers in highly concentrated companies are engaged in income enhancing practices vary in two countries. While in Finland managers are trying to show better performance for bonuses or other contractual compensation motivations, in France they avoid paying dividends or high taxes.