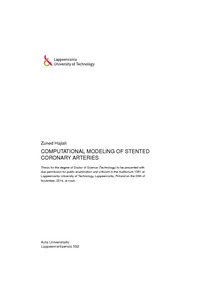 The application of computational fluid dynamics (CFD) and finite element analysis (FEA)
has been growing rapidly in the various fields of science and technology. One of the areas
of interest is in biomedical engineering. The altered hemodynamics inside the blood
vessels plays a key role in the development of the arterial disease called atherosclerosis,
which is the major cause of human death worldwide. Atherosclerosis is often treated
with the stenting procedure to restore the normal blood flow. A stent is a tubular, flexible
structure, usually made of metals, which is driven and expanded in the blocked arteries.
Despite the success rate of the stenting procedure, it is often associated with the restenosis
(re-narrowing of the artery) process. The presence of non-biological device in the artery
causes inflammation or re-growth of atherosclerotic lesions in the treated vessels. Several
factors including the design of stents, type of stent expansion, expansion pressure, morphology
and composition of vessel wall influence the restenosis process. Therefore, the
role of computational studies is crucial in the investigation and optimisation of the factors
that influence post-stenting complications.
This thesis focuses on the stent-vessel wall interactions followed by the blood flow in the
post-stenting stage of stenosed human coronary artery. Hemodynamic and mechanical
stresses were analysed in three separate stent-plaque-artery models. Plaque was modeled
as a multi-layer (fibrous cap (FC), necrotic core (NC), and fibrosis (F)) and the arterial
wall as a single layer domain. CFD/FEA simulations were performed using commercial
software packages in several models mimicking the various stages and morphologies of
atherosclerosis. The tissue prolapse (TP) of stented vessel wall, the distribution of von
Mises stress (VMS) inside various layers of vessel wall, and the wall shear stress (WSS)
along the luminal surface of the deformed vessel wall were measured and evaluated.
The results revealed the role of the stenosis size, thickness of each layer of atherosclerotic
wall, thickness of stent strut, pressure applied for stenosis expansion, and the flow condition
in the distribution of stresses. The thicknesses of FC, and NC and the total thickness
of plaque are critical in controlling the stresses inside the tissue. A small change in morphology
of artery wall can significantly affect the distribution of stresses. In particular,
FC is the most sensitive layer to TP and stresses, which could determine plaque’s vulnerability
to rupture. The WSS is highly influenced by the deflection of artery, which in turn is dependent on the structural composition of arterial wall layers. Together with the
stenosis size, their roles could play a decisive role in controlling the low values of WSS
(<0.5 Pa) prone to restenosis. Moreover, the time dependent flow altered the percentage
of luminal area with WSS values less than 0.5 Pa at different time instants. The non-
Newtonian viscosity model of the blood properties significantly affects the prediction of
WSS magnitude. The outcomes of this investigation will help to better understand the
roles of the individual layers of atherosclerotic vessels and their risk to provoke restenosis
at the post-stenting stage. As a consequence, the implementation of such an approach to
assess the post-stented stresses will assist the engineers and clinicians in optimizing the
stenting techniques to minimize the occurrence of restenosis.