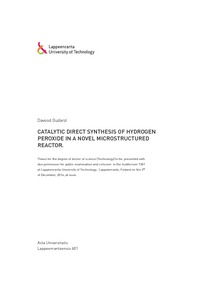 The direct synthesis from hydrogen and oxygen is a green alternative for production of
hydrogen peroxide. However, this process suffers from two challenges. Firstly, mixtures of
hydrogen and oxygen are explosive over a wide range of concentrations (4-94% H2 in O2).
Secondly, the catalytic reaction of hydrogen and oxygen involves several reaction pathways,
many of them resulting in water production and therfore decreasing selectivity.
The present work deals with these two challenges. The safety problem was dealed by
employing a novel microstructured reactor. Selectivity of the reaction was highly improved
by development a set of new catalysts. The final goal was to develop an effective and safe
continuous process for direct synthesis of hydrogen peroxide from H2 and O2.
Activated carbon cloth and Sibunit were examined as the catalysts’ supports. Palladium
and gold monometallic and palladium-gold bimetallic catalysts were thoroughly investigated
by numerous kinetic experiments performed in a tailored batch reactor and several catalyst
charachterization methods. A complete set of data for direct synthesis of H2O2 and its
catalytic decomposition and hydrogenation was obtained. These data were used to assess
factors influencing selectivity and activity of the catalysts in direct synthesis of H2O2 as well
as its decomposition and hydrogenation.
A novel microstructured reactor was developed based on hydrodynamics and mass transfer
studies in prototype microstractural plates. The shape and the size of the structural elements
in the microreactor plate were optimized in a way to get high gas-liquid interfacial area and gas-liquid mass transfer. Finally, empirical correlations for the volumetric mass transfer
coefficient were derived.
A bench-scale continuous process was developed by using the novel microstructral plate
reactor. A series of kinetic experiments were performed to investigate the effects of the gas
and the liquid feed rates and their ratio, the amount of the catalyst, the gas feed composition
and pressure on the final rate of H2O2 production and selectivity.