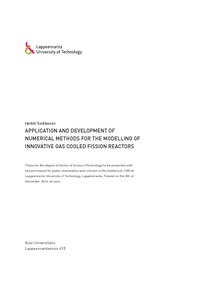 Innovative gas cooled reactors, such as the pebble bed reactor (PBR) and the gas
cooled fast reactor (GFR) offer higher efficiency and new application areas for nuclear
energy. Numerical methods were applied and developed to analyse the specific
features of these reactor types with fully three dimensional calculation models. In
the first part of this thesis, discrete element method (DEM) was used for a physically
realistic modelling of the packing of fuel pebbles in PBR geometries and methods
were developed for utilising the DEM results in subsequent reactor physics and
thermal-hydraulics calculations. In the second part, the flow and heat transfer for
a single gas cooled fuel rod of a GFR were investigated with computational fluid
dynamics (CFD) methods.
An in-house DEM implementation was validated and used for packing simulations,
in which the effect of several parameters on the resulting average packing
density was investigated. The restitution coefficient was found out to have the most
significant effect. The results can be utilised in further work to obtain a pebble bed
with a specific packing density. The packing structures of selected pebble beds were
also analysed in detail and local variations in the packing density were observed,
which should be taken into account especially in the reactor core thermal-hydraulic
analyses.
Two open source DEM codes were used to produce stochastic pebble bed configurations
to add realism and improve the accuracy of criticality calculations performed
with the Monte Carlo reactor physics code Serpent. Russian ASTRA criticality experiments
were calculated. Pebble beds corresponding to the experimental specifications
within measurement uncertainties were produced in DEM simulations and
successfully exported into the subsequent reactor physics analysis. With the developed
approach, two typical issues in Monte Carlo reactor physics calculations of
pebble bed geometries were avoided.
A novel method was developed and implemented as a MATLAB code to calculate
porosities in the cells of a CFD calculation mesh constructed over a pebble
bed obtained from DEM simulations. The code was further developed to distribute
power and temperature data accurately between discrete based reactor physics and
continuum based thermal-hydraulics models to enable coupled reactor core calculations.
The developed method was also found useful for analysing sphere packings in general.
CFD calculations were performed to investigate the pressure losses and heat transfer
in three dimensional air cooled smooth and rib roughened rod geometries, housed
inside a hexagonal flow channel representing a sub-channel of a single fuel rod of a
GFR. The CFD geometry represented the test section of the L-STAR experimental
facility at Karlsruhe Institute of Technology and the calculation results were
compared to the corresponding experimental results. Knowledge was gained of the
adequacy of various turbulence models and of the modelling requirements and issues
related to the specific application.
The obtained pressure loss results were in a relatively good agreement with the
experimental data. Heat transfer in the smooth rod geometry was somewhat under
predicted, which can partly be explained by unaccounted heat losses and uncertainties.
In the rib roughened geometry heat transfer was severely under predicted by
the used realisable k − epsilon turbulence model. An additional calculation with a v2 − f
turbulence model showed significant improvement in the heat transfer results, which
is most likely due to the better performance of the model in separated flow problems.
Further investigations are suggested before using CFD to make conclusions of the
heat transfer performance of rib roughened GFR fuel rod geometries.
It is suggested that the viewpoints of numerical modelling are included in the
planning of experiments to ease the challenging model construction and simulations
and to avoid introducing additional sources of uncertainties. To facilitate the use of
advanced calculation approaches, multi-physical aspects in experiments should also
be considered and documented in a reasonable detail.