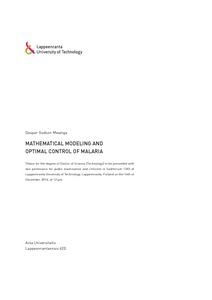 Malaria continues to infect millions and kill hundreds of thousands of people worldwide each year, despite over a century of research and attempts to control and eliminate this infectious disease. Challenges such as the development and spread of drug resistant malaria parasites, insecticide resistance to mosquitoes, climate change, the presence of individuals with subpatent malaria infections which normally are asymptomatic and behavioral plasticity in the mosquito hinder the prospects of malaria control and elimination. In this thesis, mathematical models of malaria transmission and control that address the role of drug resistance, immunity, iron supplementation and anemia, immigration and visitation, and the presence of asymptomatic carriers in malaria transmission are developed. A within-host mathematical model of severe Plasmodium falciparum malaria is also developed.
First, a deterministic mathematical model for transmission of antimalarial drug resistance parasites with superinfection is developed and analyzed. The possibility of increase in the risk of superinfection due to iron supplementation and fortification in malaria endemic areas is discussed. The model results calls upon stakeholders to weigh the pros and cons of iron supplementation to individuals living in malaria endemic regions.
Second, a deterministic model of transmission of drug resistant malaria parasites, including the inflow of infective immigrants, is presented and analyzed. The optimal control theory is applied to this model to study the impact of various malaria and vector control strategies, such as screening of immigrants, treatment of drug-sensitive infections, treatment of drug-resistant infections, and the use of insecticide-treated bed nets and indoor spraying of mosquitoes. The results of the model emphasize the importance of using a combination of all four controls tools for effective malaria intervention.
Next, a two-age-class mathematical model for malaria transmission with asymptomatic carriers is developed and analyzed. In development of this model, four possible control measures are analyzed: the use of long-lasting treated mosquito nets, indoor residual spraying, screening and treatment of symptomatic, and screening and treatment of asymptomatic individuals. The numerical results show that a disease-free equilibrium can be attained if all four control measures are used.
A common pitfall for most epidemiological models is the absence of real data; model-based conclusions have to be drawn based on uncertain parameter values. In this thesis, an approach to study the robustness of optimal control solutions under such parameter uncertainty is presented. Numerical analysis of the optimal control problem in the presence of parameter uncertainty demonstrate the robustness of the optimal control approach that: when a comprehensive control strategy is used the main conclusions of the optimal control remain unchanged, even if inevitable variability remains in the control profiles. The results provide a promising framework for the design of cost-effective strategies for disease control with multiple interventions, even under considerable uncertainty of model parameters.
Finally, a separate work modeling the within-host Plasmodium falciparum infection in humans is presented. The developed model allows re-infection of already-infected red blood cells. The model hypothesizes that in severe malaria due to parasite quest for survival and rapid multiplication, the Plasmodium falciparum can be absorbed in the already-infected red blood cells which accelerates the rupture rate and consequently cause anemia. Analysis of the model and parameter identifiability using Markov chain Monte Carlo methods is presented.