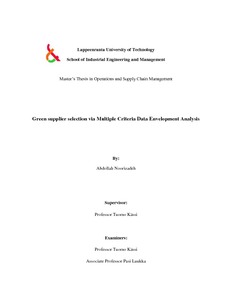 An appropriate supplier selection and its profound effects on increasing the competitive advantage of companies has been widely discussed in supply chain management (SCM) literature. By raising environmental awareness among companies and industries they attach more importance to sustainable and green activities in selection procedures of raw material providers.
The current thesis benefits from data envelopment analysis (DEA) technique to evaluate the relative efficiency of suppliers in the presence of carbon dioxide (CO2) emission for green supplier selection. We incorporate the pollution of suppliers as an undesirable output into DEA. However, to do so, two conventional DEA model problems arise: the lack of the discrimination power among decision making units (DMUs) and flexibility of the inputs and outputs weights. To overcome these limitations, we use multiple criteria DEA (MCDEA) as one alternative. By applying MCDEA the number of suppliers which are identified as efficient will be decreased and will lead to a better ranking and selection of the suppliers. Besides, in order to compare the performance of the suppliers with an ideal supplier, a “virtual” best practice supplier is introduced. The presence of the ideal virtual supplier will also increase the discrimination power of the model for a better ranking of the suppliers. Therefore, a new MCDEA model is proposed to simultaneously handle undesirable outputs and virtual DMU. The developed model is applied for green supplier selection problem. A numerical example illustrates the applicability of the proposed model.