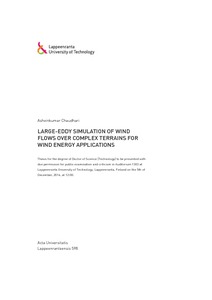 Wind energy has obtained outstanding expectations due to risks of global warming and nuclear energy production plant accidents. Nowadays, wind farms are often constructed in areas of complex terrain. A potential wind farm location must have the site thoroughly surveyed and the wind climatology analyzed before installing any hardware. Therefore, modeling of Atmospheric Boundary Layer (ABL) flows over complex terrains containing, e.g. hills, forest, and lakes is of great interest in wind energy applications, as it can help in locating and optimizing the wind farms. Numerical modeling of wind flows using Computational Fluid Dynamics (CFD) has become a popular technique during the last few decades.
Due to the inherent flow variability and large-scale unsteadiness typical in ABL flows in general and especially over complex terrains, the flow can be difficult to be predicted accurately enough by using the Reynolds-Averaged Navier-Stokes equations (RANS). Large- Eddy Simulation (LES) resolves the largest and thus most important turbulent eddies and models only the small-scale motions which are more universal than the large eddies and thus easier to model. Therefore, LES is expected to be more suitable for this kind of simulations although it is computationally more expensive than the RANS approach. With the fast development of computers and open-source CFD software during the recent years, the application of LES toward atmospheric flow is becoming increasingly common nowadays.
The aim of the work is to simulate atmospheric flows over realistic and complex terrains by means of LES. Evaluation of potential in-land wind park locations will be the main application for these simulations. Development of the LES methodology to simulate the atmospheric flows over realistic terrains is reported in the thesis. The work also aims at validating the LES methodology at a real scale. In the thesis, LES are carried out for flow problems ranging from basic channel flows to real atmospheric flows over one of the most recent real-life complex terrain problems, the Bolund hill.

All the simulations reported in the thesis are carried out using a new OpenFOAM® -based LES solver. The solver uses the 4th order time-accurate Runge-Kutta scheme and a fractional step method. Moreover, development of the LES methodology includes special attention to two boundary conditions: the upstream (inflow) and wall boundary conditions. The upstream boundary condition is generated by using the so-called recycling technique, in which the instantaneous flow properties are sampled on aplane downstream of the inlet and mapped back to the inlet at each time step. This technique develops the upstream boundary-layer flow together with the inflow turbulence without using any precursor simulation and thus within a single computational domain. The roughness of the terrain surface is modeled by implementing a new wall function into OpenFOAM® during the thesis work. Both, the recycling method and the newly implemented wall function, are validated for the channel flows at relatively high Reynolds number before applying them to the atmospheric flow applications.
After validating the LES model over simple flows, the simulations are carried out for atmospheric boundary-layer flows over two types of hills: first, two-dimensional wind-tunnel hill profiles and second, the Bolund hill located in Roskilde Fjord, Denmark. For the twodimensional wind-tunnel hills, the study focuses on the overall flow behavior as a function of the hill slope. Moreover, the simulations are repeated using another wall function suitable for smooth surfaces, which already existed in OpenFOAM® , in order to study the sensitivity of the flow to the surface roughness in ABL flows. The simulated results obtained using the two wall functions are compared against the wind-tunnel measurements. It is shown that LES using the implemented wall function produces overall satisfactory results on the turbulent flow over the two-dimensional hills. The prediction of the flow separation and reattachment-length for the steeper hill is closer to the measurements than the other numerical studies reported in the past for the same hill geometry.
The field measurement campaign performed over the Bolund hill provides the most recent field-experiment dataset for the mean flow and the turbulence properties. A number of research groups have simulated the wind flows over the Bolund hill. Due to the challenging features of the hill such as the almost vertical hill slope, it is considered as an ideal experimental test case for validating micro-scale CFD models for wind energy applications. In this work, the simulated results obtained for two wind directions are compared against the field measurements. It is shown that the present LES can reproduce the complex turbulent wind flow structures over a complicated terrain such as the Bolund hill. Especially, the present LES results show the best prediction of the turbulent kinetic energy with an average error of 24.1%, which is a 43% smaller than any other model results reported in the past for the Bolund case.
Finally, the validated LES methodology is demonstrated to simulate the wind flow over the existing Muukko wind farm located in South-Eastern Finland. The simulation is carried out only for one wind direction and the results on the instantaneous and time-averaged wind speeds are briefly reported. The demonstration case is followed by discussions on the practical aspects of LES for the wind resource assessment over a realistic inland wind farm.