Effect of ultrastructural features on mechanical properties of softwood fiber 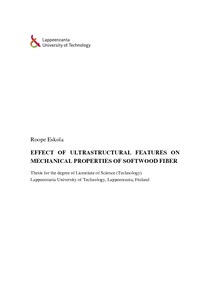 The main objective of this study was to develop mathematical model capable to describe the effect of ultrastructural features on the longitudinal modulus of elasticity of softwood fiber. Another objective was to identify, based on ultrastructural features, a potential explanatory factor for the mechanical difference between Norway spruce and Scots pine fibers and to demonstrate its influence utilizing developed modelling tools.
According to the literature, the main difference between the pine and spruce fibers is the pit structure, which is clearly different in these fibers. The spruce fiber contains a lot of tiny pits, whereas the pits of the pine fiber are larger and the total number of them is smaller. The effect of the pits on the longitudinal modulus of elasticity of fiber is studied with both the analytical and the numerical model.
The results show that, although the spruce fiber seems to contain clearly more pits, larger pits appearing in the pine fiber turn out to have a stronger influence on the longitudinal modulus of elasticity of the fiber. The effect of local variation of microfibril angle which occurs near the pits seems to be minor. Moreover, the results suggest that spruce fibers may have higher ultimate strength due to the more uniform straining behavior.