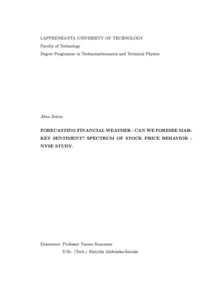 The desire to create a statistical or mathematical model, which would allow predicting the future changes in stock prices, was born many years ago. Economists and mathematicians are trying to solve this task by applying statistical analysis and physical laws, but there are still no satisfactory results. The main reason for this is that a stock exchange is a non-stationary, unstable and complex system, which is influenced by many factors.
In this thesis the New York Stock Exchange was considered as the system to be explored. A topological analysis, basic statistical tools and singular value decomposition were conducted for understanding the behavior of the market. Two methods for normalization of initial daily closure prices by Dow Jones and S&P500 were introduced and applied for further analysis.
As a result, some unexpected features were identified, such as a shape of distribution of correlation matrix, a bulk of which is shifted to the right hand side with respect to zero. Also non-ergodicity of NYSE was confirmed graphically. It was shown, that singular vectors differ from each other by a constant factor. There are for certain results no clear conclusions from this work, but it creates a good basis for the further analysis of market topology.