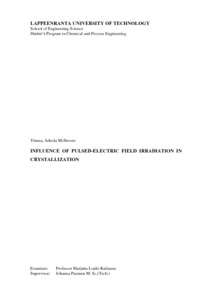 The growing pharmaceutical interest, among others, in the polymorphic composition of the emerging solid end-products from production processes has been traced to the need for attainment of high product purity. This is more so as the presence of different polymorphs may constitute physical impurity of the product. Hence, the need for optimization of the yield of desired product component(s) through controlled crystallization kinetics for instance.
This study was carried out to investigate the impact of pulsed electric field (PEF) irradiation on the crystal morphology of glycine obtained by cooling crystallization (without seeding) from commercial glycine sample in distilled deionized water solution. In doing so, three different pulse frequencies (294, 950 and 145 Hz) and a case without PEF were studied at three cooling rates (5, 10 and 20 ºC/h). The crystal products obtained were analyzed for polymorphic composition by powder x-ray diffraction (PXRD) and Fourier transform infrared (FTIR) spectroscopy while the particles characterization was done on Morphologi G3.
The results obtained from this study showed that pulsed electric field irradiation had significant impact on metastability of the aqueous solution as well as on the polymorphic composition of the end product. With increasing PEF frequency applied, nucleation started earlier and the γ-glycine polymorph content of the product crystals increased. These were found to have been aided by cooling rate, as the most significant effect was observed at 5 ºC/h. It was also discovered that PEF application had no measurable impact on the pH of the aqueous solution as well as the size distribution of the particles. Cooling on the contrary was believed to be responsible for the broadening of the particle size distribution with a downward shift of the lower limit of the raw material from about 100 μm to between 10 and 50 μm.