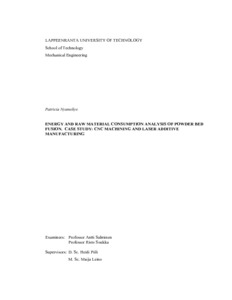 Laser additive manufacturing (LAM), known also as 3D printing, is a powder bed fusion (PBF) type of additive manufacturing (AM) technology used to manufacture metal parts layer by layer by assist of laser beam. The development of the technology from building just prototype parts to functional parts is due to design flexibility. And also possibility to manufacture tailored and optimised components in terms of performance and strength to weight ratio of final parts. The study of energy and raw material consumption in LAM is essential as it might facilitate the adoption and usage of the technique in manufacturing industries. The objective this thesis was find the impact of LAM on environmental and economic aspects and to conduct life cycle inventory of CNC machining and LAM in terms of energy and raw material consumption at production phases. Literature overview in this thesis include sustainability issues in manufacturing industries with focus on environmental and economic aspects. Also life cycle assessment and its applicability in manufacturing industry were studied. UPLCI-CO2PE! Initiative was identified as mostly applied exiting methodology to conduct LCI analysis in discrete manufacturing process like LAM. Many of the reviewed literature had focused to PBF of polymeric material and only few had considered metallic materials. The studies that had included metallic materials had only measured input and output energy or materials of the process and compared to different AM systems without comparing to any competitive process. Neither did any include effect of process variation when building metallic parts with LAM. Experimental testing were carried out to make dissimilar samples with CNC machining and LAM in this thesis. Test samples were designed to include part complexity and weight reductions. PUMA 2500Y lathe machine was used in the CNC machining whereas a modified research machine representing EOSINT M-series was used for the LAM. The raw material used for making the test pieces were stainless steel 316L bar (CNC machined parts) and stainless steel 316L powder (LAM built parts). An analysis of power, time, and the energy consumed in each of the manufacturing processes on production phase showed that LAM utilises more energy than CNC machining. The high energy consumption was as result of duration of production. Energy consumption profiles in CNC machining showed fluctuations with high and low power ranges. LAM energy usage within specific mode (standby, heating, process, sawing) remained relatively constant through the production. CNC machining was limited in terms of manufacturing freedom as it was not possible to manufacture all the designed sample by machining. And the one which was possible was aided with large amount of material removed as waste. Planning phase in LAM was shorter than in CNC machining as the latter required many preparation steps. Specific energy consumption (SEC) were estimated in LAM based on the practical results and assumed platform utilisation. The estimated platform utilisation showed SEC could reduce when more parts were placed in one build than it was in with the empirical results in this thesis (six parts).