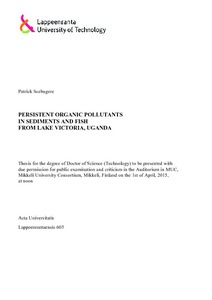 This thesis describes the occurrence and sources of selected persistent organic pollutants (POPs)
such as polychlorinated dibenzo-p-dioxins (PCDDs), polychlorinated dibenzofurans (PCDFs),
polychlorinated biphenyls (PCBs), polybrominated diphenyl ethers (PBDEs) and
hexachlorocyclohexanes (HCHs) in the northern watershed of Lake Victoria. Sediments and fish
were collected from three highly polluted embayments (i.e. Murchison Bay, Napoleon Gulf and
Thurston Bay) of the lake. The analysis for PCDD/Fs, PCBs and PBDEs was done using a high
resolution mass spectrometer coupled to a gas chromatograph (GC), and a GC equipped with an
electron capture detector was used for HCHs. Total (Σ) PCDD/Fs, PCBs and PBDEs in
sediments ranged from 3.19 to 478, 313 to 4325 and 60.8 to 179 pg g-1 dry weight (dw),
respectively. The highest concentrations of pollutants were found at sites close to industrial areas
and wastewater discharge points. The maximum concentrations of PCDD/Fs, PCBs, PBDEs and
HCHs in fish muscle homogenates were 49, 779, 495 and 45,900 pg g-1 wet weight (ww),
respectively. The concentrations of the pollutants in Nile perch (Lates niloticus) were
significantly greater than those in Nile tilapia (Oreochromis niloticus), possibly due to
differences in trophic level and dietary feeding habits among fish species. World Health Organization-toxic equivalency quotient (WHO2005-TEQ) values in the sediments were up to 4.24
pg g-1 dw for PCDD/Fs and 0.55 pg TEQ g-1 dw for the 12 dioxin-like PCBs (dl-PCBs). 23.1% of
the samples from the Napoleon Gulf were above the interim sediment quality guideline value of
0.85 pg WHO-TEQ g-1 dw set by the Canadian Council for Ministers of the Environment. The
WHO2005-TEQs in fish were 0.001-0.16 pg g-1 for PCDD/Fs and 0.001-0.31 pg g-1 ww for dl-
PCBs. The TEQ values were within a permissible level of 3.5 pg g−1 ww recommended by the
European Commission. Based on the Commission set TEQs and minimum risk level criteria
formulated by the Agency for Toxic Substances and Disease Registry, the consumption of fish
from Lake Victoria gives no indication of health risks associated to PCDD/Fs and PCBs.
Principal component analysis (PCA) indicated that anthropogenic activities such as agricultural
straw open burning, medical waste incinerators and municipal solid waste combustors were the
major sources of PCDD/Fs in the watershed of Lake Victoria. The ratios of α-/γ-HCH varied
from 0.89 to 1.68 suggesting that the highest HCH residues mainly came from earlier usage and
fresh γ-HCH (lindane). In the present study, the concentration of POPs in fish were not
significantly related to those in sediments, and the biota sediment accumulation factor (BSAF)
concept was found to be a poor predictor of the bioavailability and bioaccumulation of
environmental pollutants.