Genetically Modified Organisms (GMOs) and Agroecology in Agricultural Production in the United States - A Comparative Analysis. 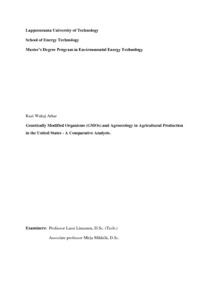 The world’s population is growing at a rapid rate and one of the primary problems of a growing is food supply. To ensure food supply and security, the biggest companies in the agricultural sector of the United States and all over the world have collaborated to produce genetically modified organisms, including crops, that have a tendency to increase yields and are speculated to reduce pesticide use. It’s a technology that is declared to have a multitude of benefits. During the same time period another set of practices has risen to the horizon by the name of agroecology. It spreads across many different sectors such as politics, sociology, environment, health and so on. Moreover, it involves primitive organic techniques that can be applied at farm level to enhance the performance of an ecosystem to effectively decrease the negative effect on environment and health of individuals while producing good quality foods. Since both the processes proclaim sustainable development, a natural question may come in mind that which one seems more favorable? During the course of this study, genetically modified organisms (GMOs) and agroecology are compared within the sphere of social, environmental and health aspects. The results derived upon a comparative analysis of scientific literature tend to prove that GMOs pose a greater threat to the environment, health of individuals and the generalized social balance in the United States compared to agroecological practices. Economic indicators were not included in the study and more studies might be needed in the future to get a broader view on the subject.