Control of Robot by Means of Human Thought 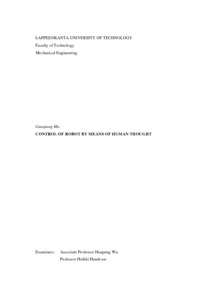 Control of robot by means of human thought.pdf (2.733Mb)
Lataukset:

Brain computer interface (BCI) is a kind of human machine interface, which provides a new interaction method between human and computer or other equipment. The most significant characteristic of BCI system is that its control input is brain electrical activities acquired from the brain instead of traditional input such as hands or eyes. BCI technique has rapidly developed during last two decades and it has mainly worked as an auxiliary technique to help the disable people improve their life qualities. With the appearance of low cost novel electrical devices such as EMOTIV, BCI technique has been applied to the general public through many useful applications including video gaming, virtual reality and virtual keyboard. The purpose of this research is to be familiar with EMOTIV EPOC system and make use of it to build an EEG based BCI system for controlling an industrial manipulator by means of human thought. To build a BCI system, an acquisition program based on EMOTIV EPOC system is designed and a MFC based dialog that works as an operation panel is presented. Furthermore, the inverse kinematics of RV-3SB industrial robot was solved. In the last part of this research, the designed BCI system with human thought input is examined and the results indicate that the system is running smoothly and displays clearly the motion type and the incremental displacement of the motion.