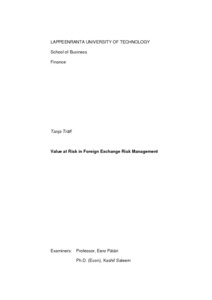 The results show that the previously mentioned VaR models performance in foreign exchange risk management is not to be considered as a single tool in foreign exchange rate risk management. The variance-covariance method and Monte Carlo simulation performs poorest in both currency portfolios. Both historical methods performed better but should also be considered as an additional tool along with other more sophisticated analysis tools.

A comparative study of VaR estimates and forward prices is also included in the thesis. The study reveals that regardless of the expensive hedging cost of emerging market currencies the risk captured by VaR is more expensive and thus FX forward hedging is recommended