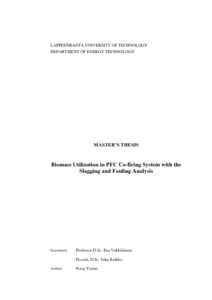 Study of PFC co-firing system with the experiment of slagging and fouling analysis. (2.444Mb)
Lataukset:

Master’s thesis Biomass Utilization in PFC Co-firing System with the Slagging and Fouling Analysis is the study of the modern technologies of different coal-firing systems: PFC system, FB system and GF system. The biomass co-fired with coal is represented by the research of the company Alstom Power Plant.
Based on the back ground of the air pollution, greenhouse effect problems and the national fuel security today, the bioenergy utilization is more and more popular. However, the biomass is promoted to burn to decrease the emission amount of carbon dioxide and other air pollutions, new problems form like slagging and fouling, hot corrosion in the firing systems. Thesis represent the brief overview of different coal-firing systems utilized in the world, and focus on the biomass-coal co-firing in the PFC system. The biomass supply and how the PFC system is running are represented in the thesis. Additionally, the new problems of hot corrosion, slagging and fouling are mentioned. The slagging and fouling problem is simulated by using the software HSC Chemistry 6.1, and the emissions comparison between coal-firing and co-firing are simulated as well.