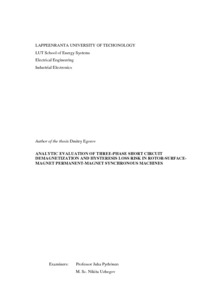 Permanent magnet synchronous machines (PMSM) have become widely used in applications because of high efficiency compared to synchronous machines with exciting winding or to induction motors. This feature of PMSM is achieved through the using the permanent magnets (PM) as the main excitation source. The magnetic properties of the PM have significant influence on all the PMSM characteristics. Recent observations of the PM material properties when used in rotating machines revealed that in all PMSMs the magnets do not necessarily operate in the second quadrant of the demagnetization curve which makes the magnets prone to hysteresis losses. Moreover, still no good analytical approach has not been derived for the magnetic flux density distribution along the PM during the different short circuits faults.
The main task of this thesis is to derive simple analytical tool which can predict magnetic flux density distribution along the rotor-surface mounted PM in two cases: during normal operating mode and in the worst moment of time from the PM’s point of view of the three phase symmetrical short circuit. The surface mounted PMSMs were selected because of their prevalence and relatively simple construction. The proposed model is based on the combination of two theories: the theory of the magnetic circuit and space vector theory.
The comparison of the results in case of the normal operating mode obtained from finite element software with the results calculated with the proposed model shows good accuracy of model in the parts of the PM which are most of all prone to hysteresis losses. The comparison of the results for three phase symmetrical short circuit revealed significant inaccuracy of the proposed model compared with results from finite element software.
The analysis of the inaccuracy reasons was provided. The impact on the model of the Carter factor theory and assumption that air have permeability of the PM were analyzed. The propositions for the further model development are presented.