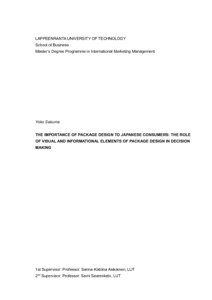 The importance of package design as a marketing tool is growing as the competition in retail environment increases. However, there is a lack of studies on how each element of package design affects consumer decisions in different countries. The objective of this thesis is to study the role of package design to Japanese consumers. The research was conducted through an experiment with a sample of 37 Japanese female participants. They were divided into two groups and were given different tasks: one group had to choose a chocolate for themselves, and the other for a group of friends. The participants were presented with 15 different Finnish chocolate boxes to choose from. The qualitative data was gathered through observation and semi-structured interviews. In addition, data from questionnaires was quantified and all the data was triangulated.

The empirical results suggest that visual elements strongly affect the decision making of Japanese consumers. Image was the most important element which acted as both, a visual and an informational aspect in the experiment. Informational elements on the other hand have little effect, especially when the context is written in a foreign language. However, informational elements affected participants who were choosing chocolates for a group of friends. A unique finding was the importance of kawaii (cuteness) to Japanese consumers.