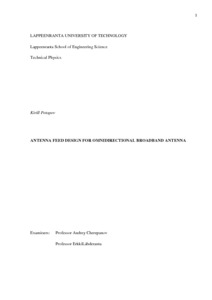 This thesis is about development broadband feed for two-mirror antenna system that match following requirements: beamwidth from 45 to 90 degrees at -3 dB level, circular polarization, absence of radiation to the lower hemisphere area. Literature review was done in the areas of the UWB antennas creation. During the work attempts were made to create a feed in a form of the quad ridged horn and "eleven" antennas. The latter is introduced as the most effective feed among all antennas discussed in thesis. Radiation patterns and other results for "eleven" antenna were obtained. Results were saved as far field sources and placed slightly below focal point into the two-mirror antenna system, because phase center of the “eleven” antenna is predominantly shifted upwards. Directivity patterns for the two-mirror system were obtained and the conclusions about the work results have been made