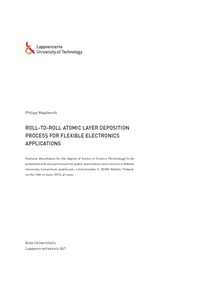 Atomic Layer Deposition (ALD) is the technology of choice where very thin and highquality
films are required. Its advantage is its ability to deposit dense and pinhole-free
coatings in a controllable manner. It has already shown promising results in a range of
applications, e.g. diffusion barrier coatings for OLED displays, surface passivation layers
for solar panels. Spatial Atomic Layer Deposition (SALD) is a concept that allows a
dramatic increase in ALD throughput. During the SALD process, the substrate moves
between spatially separated zones filled with the respective precursor gases and reagents
in such a manner that the exposure sequence replicates the conventional ALD cycle.
The present work describes the development of a high-throughput ALD process.
Preliminary process studies were made using an SALD reactor designed especially for this
purpose. The basic properties of the ALD process were demonstrated using the wellstudied
Al2O3 trimethyl aluminium (TMA)+H2O process. It was shown that the SALD
reactor is able to deposit uniform films in true ALD mode. The ALD nature of the process
was proven by demonstrating self-limiting behaviour and linear film growth. The process
behaviour and properties of synthesized films were in good agreement with previous ALD
studies. Issues related to anomalous deposition at low temperatures were addressed as well.
The quality of the coatings was demonstrated by applying 20 nm of the Al2O3 on to
polymer substrate and measuring its moisture barrier properties. The results of tests
confirmed the superior properties of the coatings and their suitability for flexible
electronics encapsulation. Successful results led to the development of a pilot scale roll-to-roll coating system. It was
demonstrated that the system is able to deposit superior quality films with a water
transmission rate of 5x10-6 g/m2day at a web speed of 0.25 m/min. That is equivalent to a
production rate of 180 m2/day and can be potentially increased by using wider webs.
State-of-art film quality, high production rates and repeatable results make SALD the
technology of choice for manufacturing ultra-high barrier coatings for flexible electronics.