Modification of Photocatalyst with Enhanced Photocatalytic Activity for Water 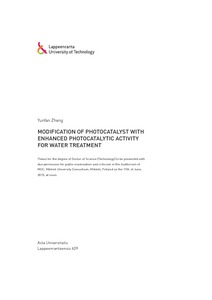 Increasing demand and shortage of energy resources and clean water due to the
rapid development of industry, population growth and long term droughts have become
an issue worldwide. As a result, global warming, long term droughts and pollution-related
diseases are becoming more and more serious. The traditional technologies, such as
precipitation, neutralization, sedimentation, filtration and waste immobilization, cannot
prevent the pollution but restrict the waste chemicals only after the pollution emission.
Meanwhile, most of these treatments cannot thoroughly degrade the contaminants and
may generate toxic secondary pollutants into ecosystem.
Heterogeneous photocatalysis as the innovative wastewater technology attracts
many attention, because it is able to generate highly reactive transitory species for total
degradation of organic compounds, water pathogens and disinfection by-products.
Semiconductor as photocatalysts have demonstrated their efficiency in degrading a wide
range of organics into readily biodegradable compounds, and eventually mineralized
them to innocuous carbon dioxide and water. But, the efficiency of photocatalysis is
limited, and hence, it is crucial issue to modify photocatalyst to enhance photocatalytic
activity.
In this thesis, first of all, two literature views are conducted. A survey of materials
for photocatalysis has been carried out in order to summarize the properties and the applications of photocatalysts that have been developed in this field. Meanwhile, the
strategy for the improvement of photocatalytic activity have been explicit discussed.
Furthermore, all the raw material and chemicals used in this work have been listed
as well as a specific experimental process and characterization method has been described.
The synthesize methods of different photocatalysts have been depicted step by step.
Among these cases, different modification strategies have been used to enhance the
efficiency of photocatalyst on degradation of organic compounds (Methylene Blue or
Phenol). For each case, photocatalytic experiments have been done to exhibit their
photocatalytic activity.The photocatalytic experiments have been designed and its process
have been explained and illustrated in detailed.
Moreover, the experimental results have been shown and discussion. All the
findings have been demonstrated in detail and discussed case by case. Eventually, the
mechanisms on the improvement of photocatalytic activities have been clarified by
characterization of samples and analysis of results. As a conclusion, the photocatalytic
activities of selected semiconductors have been successfully enhanced via choosing
appropriate strategy for the modification of photocatalysts.