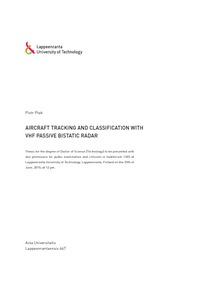 Since the times preceding the Second World War the subject of aircraft tracking has been a core interest to both military and non-military aviation. During subsequent years both technology and configuration of the radars allowed the users to deploy it in numerous fields, such as over-the-horizon radar, ballistic missile early warning systems or forward scatter fences. The latter one was arranged in a bistatic configuration. The bistatic radar has continuously re-emerged over the last eighty years for its intriguing capabilities and challenging configuration and formulation. The bistatic radar arrangement is used as the basis of all the analyzes presented in this work.
The aircraft tracking method of VHF Doppler-only information, developed in the first part of this study, is solely based on Doppler frequency readings in relation to time instances of their appearance. The corresponding inverse problem is solved by utilising a multistatic radar scenario with two receivers and one transmitter and using their frequency readings as a base for aircraft trajectory estimation. The quality of the resulting trajectory is then compared with ground-truth information based on ADS-B data.
The second part of the study deals with the developement of a method for instantaneous Doppler curve extraction from within a VHF time-frequency representation of the transmitted signal, with a three receivers and one transmitter configuration, based on a priori knowledge of the probability density function of the first order derivative of the Doppler shift, and on a system of blocks for identifying, classifying and predicting the Doppler signal. The extraction capabilities of this set-up are tested with a recorded TV signal and simulated synthetic spectrograms.
Further analyzes are devoted to more comprehensive testing of the capabilities of the extraction method. Besides testing the method, the classification of aircraft is performed on the extracted Bistatic Radar Cross Section profiles and the correlation between them for different types of aircraft. In order to properly estimate the profiles, the ADS-B aircraft location information is adjusted based on extracted Doppler frequency and then used for Bistatic Radar Cross Section estimation. The classification is based on seven types of aircraft grouped by their size into three classes.