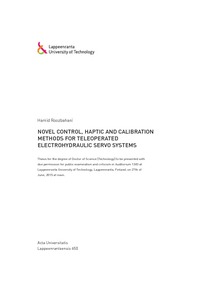 The aim of this thesis is to propose a novel control method for teleoperated electrohydraulic servo
systems that implements a reliable haptic sense between the human and manipulator interaction, and
an ideal position control between the manipulator and the task environment interaction. The proposed
method has the characteristics of a universal technique independent of the actual control algorithm
and it can be applied with other suitable control methods as a real-time control strategy. The
motivation to develop this control method is the necessity for a reliable real-time controller for
teleoperated electrohydraulic servo systems that provides highly accurate position control based on
joystick inputs with haptic capabilities. The contribution of the research is that the proposed control
method combines a directed random search method and a real-time simulation to develop an
intelligent controller in which each generation of parameters is tested on-line by the real-time
simulator before being applied to the real process. The controller was evaluated on a hydraulic
position servo system.
The simulator of the hydraulic system was built based on Markov chain Monte Carlo (MCMC)
method. A Particle Swarm Optimization algorithm combined with the foraging behavior of E. coli
bacteria was utilized as the directed random search engine. The control strategy allows the operator
to be plugged into the work environment dynamically and kinetically. This helps to ensure the system
has haptic sense with high stability, without abstracting away the dynamics of the hydraulic system.
The new control algorithm provides asymptotically exact tracking of both, the position and the contact
force.
In addition, this research proposes a novel method for re-calibration of multi-axis force/torque
sensors. The method makes several improvements to traditional methods. It can be used without
dismantling the sensor from its application and it requires smaller number of standard loads for
calibration. It is also more cost efficient and faster in comparison to traditional calibration methods.
The proposed method was developed in response to re-calibration issues with the force sensors
utilized in teleoperated systems. The new approach aimed to avoid dismantling of the sensors from
their applications for applying calibration. A major complication with many manipulators is the difficulty accessing them when they operate inside a non-accessible environment; especially if those
environments are harsh; such as in radioactive areas.
The proposed technique is based on design of experiment methodology. It has been successfully
applied to different force/torque sensors and this research presents experimental validation of use of
the calibration method with one of the force sensors which method has been applied to.