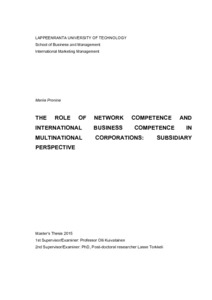 On-going process of globalization makes companies all over the world to go beyond the national markets and internationalize. Organizational form of multinational corporation (MNC) has capabilities for establishing the affiliate companies in several countries. Thus, the relocation of resources occurs and particularly, the cross-border transfer of knowledge which possesses the competitive advantage. However, differences in countries` business environments and cultures may constrain this capability.
The research aim of this thesis is to investigate the role of subsidiary’s network competence (ability to build and manage the relationships with other local business units) and international business competence in relation to the benefits that MNC receives from a subsidiary. Additionally, subsidiary’s business adaptation, partnerships and knowledge transfer mechanism with parent company and external partners are investigated.
This research, conducted in the Finnish-Russian context, consists of theoretical and empirical parts. The qualitative approach in the form of multiple case studies is employed. The empirical data incorporated primary and secondary data in the form of interviews collected in 2013 and 2015 years. Interviews were collected from four Finnish case companies in Saint-Petersburg and Kaluga region and five Russian partner companies. Results are drawn from two cases from Saint-Petersburg. The abductive research approach for the results analysis is adopted.
The results indicate that both competencies lead to the subsidiary’s local embeddedness in the form of mutual business activities with local business partners and product adaptation for the local market needs. In addition to the monetary benefits in form of payments or turnover share, local embeddedness brings the knowledge of the local environment which is utilized by an MNC in the long-term planning. Another found tacit benefit is the access to the national market. This is strategically useful benefit not only for parent MNC but also for the subsidiary’s partners, i.e. international suppliers.