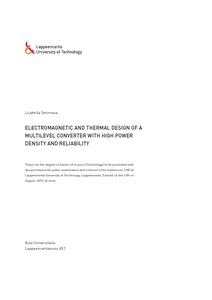 Electric energy demand has been growing constantly as the global population increases.
To avoid electric energy shortage, renewable energy sources and energy conservation are
emphasized all over the world. The role of power electronics in energy saving and
development of renewable energy systems is significant. Power electronics is applied in
wind, solar, fuel cell, and micro turbine energy systems for the energy conversion and
control. The use of power electronics introduces an energy saving potential in such
applications as motors, lighting, home appliances, and consumer electronics.
Despite the advantages of power converters, their penetration into the market requires
that they have a set of characteristics such as high reliability and power density, cost
effectiveness, and low weight, which are dictated by the emerging applications. In
association with the increasing requirements, the design of the power converter is
becoming more complicated, and thus, a multidisciplinary approach to the modelling of
the converter is required.
In this doctoral dissertation, methods and models are developed for the design of a
multilevel power converter and the analysis of the related electromagnetic, thermal, and
reliability issues. The focus is on the design of the main circuit. The electromagnetic
model of the laminated busbar system and the IGBT modules is established with the aim
of minimizing the stray inductance of the commutation loops that degrade the converter
power capability. The circular busbar system is proposed to achieve equal current sharing
among parallel-connected devices and implemented in the non-destructive test set-up. In
addition to the electromagnetic model, a thermal model of the laminated busbar system
is developed based on a lumped parameter thermal model. The temperature and
temperature-dependent power losses of the busbars are estimated by the proposed
algorithm. The Joule losses produced by non-sinusoidal currents flowing through the
busbars in the converter are estimated taking into account the skin and proximity effects,
which have a strong influence on the AC resistance of the busbars.
The lifetime estimation algorithm was implemented to investigate the influence of the
cooling solution on the reliability of the IGBT modules. As efficient cooling solutions
have a low thermal inertia, they cause excessive temperature cycling of the IGBTs. Thus,
a reliability analysis is required when selecting the cooling solutions for a particular
application. The control of the cooling solution based on the use of a heat flux sensor is
proposed to reduce the amplitude of the temperature cycles.
The developed methods and models are verified experimentally by a laboratory prototype.