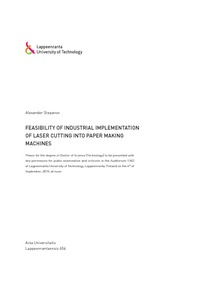 Laser cutting implementation possibilities into paper making machine was studied as the main
objective of the work. Laser cutting technology application was considered as a replacement
tool for conventional cutting methods used in paper making machines for longitudinal cutting
such as edge trimming at different paper making process and tambour roll slitting.
Laser cutting of paper was tested in 70’s for the first time. Since then, laser cutting and
processing has been applied for paper materials with different level of success in industry. Laser
cutting can be employed for longitudinal cutting of paper web in machine direction. The most
common conventional cutting methods include water jet cutting and rotating slitting blades
applied in paper making machines. Cutting with CO2 laser fulfils basic requirements for cutting
quality, applicability to material and cutting speeds in all locations where longitudinal cutting
is needed.
Literature review provided description of advantages, disadvantages and challenges of laser
technology when it was applied for cutting of paper material with particular attention to cutting
of moving paper web. Based on studied laser cutting capabilities and problem definition of
conventional cutting technologies, preliminary selection of the most promising application area
was carried out. Laser cutting (trimming) of paper web edges in wet end was estimated to be
the most promising area where it can be implemented. This assumption was made on the basis
of rate of web breaks occurrence. It was found that up to 64 % of total number of web breaks
occurred in wet end, particularly in location of so called open draws where paper web was
transferred unsupported by wire or felt. Distribution of web breaks in machine cross direction
revealed that defects of paper web edge was the main reason of tearing initiation and
consequent web break.
The assumption was made that laser cutting was capable of improvement of laser cut edge
tensile strength due to high cutting quality and sealing effect of the edge after laser cutting.
Studies of laser ablation of cellulose supported this claim.
Linear energy needed for cutting was calculated with regard to paper web properties in intended
laser cutting location. Calculated linear cutting energy was verified with series of laser cutting.
Practically obtained laser energy needed for cutting deviated from calculated values. This could be explained by difference in heat transfer via radiation in laser cutting and different absorption
characteristics of dry and moist paper material.
Laser cut samples (both dry and moist (dry matter content about 25-40%)) were tested for
strength properties. It was shown that tensile strength and strain break of laser cut samples are
similar to corresponding values of non-laser cut samples. Chosen method, however, did not
address tensile strength of laser cut edge in particular. Thus, the assumption of improving
strength properties with laser cutting was not fully proved.
Laser cutting effect on possible pollution of mill broke (recycling of trimmed edge) was carried
out. Laser cut samples (both dry and moist) were tested on the content of dirt particles. The
tests revealed that accumulation of dust particles on the surface of moist samples can take place.
This has to be taken into account to prevent contamination of pulp suspension when trim waste
is recycled. Material loss due to evaporation during laser cutting and amount of solid residues
after cutting were evaluated. Edge trimming with laser would result in 0.25 kg/h of solid
residues and 2.5 kg/h of lost material due to evaporation.
Schemes of laser cutting implementation and needed laser equipment were discussed.
Generally, laser cutting system would require two laser sources (one laser source for each
cutting zone), set of beam transfer and focusing optics and cutting heads. In order to increase
reliability of system, it was suggested that each laser source would have double capacity. That
would allow to perform cutting employing one laser source working at full capacity for both
cutting zones. Laser technology is in required level at the moment and do not require additional
development. Moreover, capacity of speed increase is high due to availability high power laser
sources what can support the tendency of speed increase of paper making machines.
Laser cutting system would require special roll to maintain cutting. The scheme of such roll
was proposed as well as roll integration into paper making machine. Laser cutting can be done
in location of central roll in press section, before so-called open draw where many web breaks occur, where it has potential to improve runability of a paper making machine.
Economic performance of laser cutting was done as comparison of laser cutting system and
water jet cutting working in the same conditions. It was revealed that laser cutting would still
be about two times more expensive compared to water jet cutting. This is mainly due to high
investment cost of laser equipment and poor energy efficiency of CO2 lasers. Another factor is
that laser cutting causes material loss due to evaporation whereas water jet cutting almost does
not cause material loss.
Despite difficulties of laser cutting implementation in paper making machine, its
implementation can be beneficial. The crucial role in that is possibility to improve cut edge
strength properties and consequently reduce number of web breaks. Capacity of laser cutting
to maintain cutting speeds which exceed current speeds of paper making machines what is
another argument to consider laser cutting technology in design of new high speed paper
making machines.