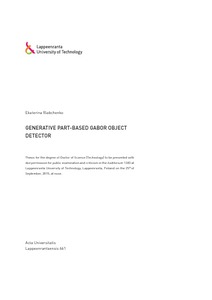 Object detection is a fundamental task of computer vision that is utilized as a core part in
a number of industrial and scientific applications, for example, in robotics, where objects
need to be correctly detected and localized prior to being grasped and manipulated.
Existing object detectors vary in (i) the amount of supervision they need for training,
(ii) the type of a learning method adopted (generative or discriminative) and (iii) the
amount of spatial information used in the object model (model-free, using no spatial
information in the object model, or model-based, with the explicit spatial model of an
object). Although some existing methods report good performance in the detection of
certain objects, the results tend to be application specific and no universal method has
been found that clearly outperforms all others in all areas.
This work proposes a novel generative part-based object detector. The generative learning
procedure of the developed method allows learning from positive examples only.
The detector is based on finding semantically meaningful parts of the object (i.e. a
part detector) that can provide additional information to object location, for example,
pose. The object class model, i.e. the appearance of the object parts and their spatial
variance, constellation, is explicitly modelled in a fully probabilistic manner. The appearance
is based on bio-inspired complex-valued Gabor features that are transformed to
part probabilities by an unsupervised Gaussian Mixture Model (GMM). The proposed
novel randomized GMM enables learning from only a few training examples. The probabilistic
spatial model of the part configurations is constructed with a mixture of 2D
Gaussians. The appearance of the parts of the object is learned in an object canonical
space that removes geometric variations from the part appearance model. Robustness
to pose variations is achieved by object pose quantization, which is more efficient than
previously used scale and orientation shifts in the Gabor feature space. Performance of
the resulting generative object detector is characterized by high recall with low precision,
i.e. the generative detector produces large number of false positive detections. Thus a
discriminative classifier is used to prune false positive candidate detections produced by
the generative detector improving its precision while keeping high recall. Using only a small number of positive examples, the developed object detector performs comparably
to state-of-the-art discriminative methods.