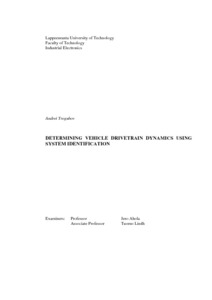 Target of this book is to propose an approach for modelling drivetrain dynamics in order to design further a vibration control system of a hybrid bus. In this thesis two approaches are examined and compared. First model is obtained by theoretical means: drivetrain is represented as a system of rotating masses, which motion is described with differential equations. Second model is obtained using system identification method: mathematical description of the dynamic behavior of a system is formed based on measured input (torque) and output (speed) data. Then two models are compared and an optimal approach is suggested.