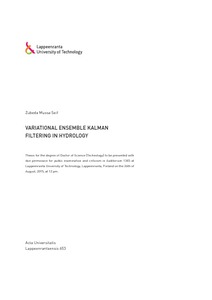 The current thesis manuscript studies the suitability of a recent data assimilation method, the Variational Ensemble Kalman Filter (VEnKF), to real-life fluid dynamic problems in hydrology. VEnKF combines a variational formulation of the data assimilation problem based on minimizing an energy functional with an Ensemble Kalman filter approximation to the Hessian matrix that also serves as an approximation to the inverse of the error covariance matrix. One of the significant features of VEnKF is the very frequent re-sampling of the ensemble: resampling is done at every observation step. This unusual feature is further exacerbated by observation interpolation that is seen beneficial for numerical stability. In this case the ensemble is resampled every time step of the numerical model. VEnKF is implemented in several configurations to data from a real laboratory-scale dam break problem modelled with the shallow water equations. It is also tried in a two-layer Quasi- Geostrophic atmospheric flow problem. In both cases VEnKF proves to be an efficient and accurate data assimilation method that renders the analysis more realistic than the numerical model alone. It also proves to be robust against filter instability by its adaptive nature.