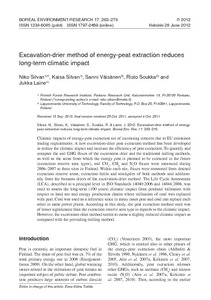 
This publication is protected by copyright. You may download, display and print it for Your own personal use. Commercial use is prohibited.
Näytä kaikki kuvailutiedot
Julkaisun pysyvä osoite on
http://urn.fi/URN:NBN:fi-fe2015101914960

Climatic impacts of energy-peat extraction are of increasing concern due to EU emissions trading requirements. A new excavation-drier peat extraction method has been developed to reduce the climatic impact and increase the efficiency of peat extraction. To quantify and compare the soil GHG fluxes of the excavation drier and the traditional milling methods, as well as the areas from which the energy peat is planned to be extracted in the future (extraction reserve area types), soil CO2, CH4 and N2O fluxes were measured during 2006–2007 at three sites in Finland. Within each site, fluxes were measured from drained extraction reserve areas, extraction fields and stockpiles of both methods and additionally from the biomass driers of the excavation-drier method. The Life Cycle Assessment (LCA), described at a principal level in ISO Standards 14040:2006 and 14044:2006, was used to assess the long-term (100 years) climatic impact from peatland utilisation with respect to land use and energy production chains where utilisation of coal was replaced with peat. Coal was used as a reference since in many cases peat and coal can replace each other in same power plants. According to this study, the peat extraction method used was of lesser significance than the extraction reserve area type in regards to the climatic impact. However, the excavation-drier method seems to cause a slightly reduced climatic impact as compared with the prevailing milling method.