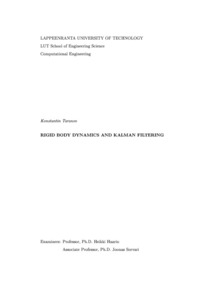 X-ray computed log tomography has always been applied for qualitative reconstructions. In most cases, a series of consecutive slices of the timber are scanned to estimate the 3D image reconstruction of the entire log. However, the unexpected movement of the timber under study influences the quality of image reconstruction since the position and orientation of some scanned slices can be incorrectly estimated. In addition, the reconstruction time remains a significant challenge for practical applications. The present study investigates the possibility to employ modern physics engines for the problem of estimating the position of a moving rigid body and its scanned slices which are subject to X-ray computed tomography. The current work includes implementations of the extended Kalman filter and an algebraic reconstruction method for fan-bean computer tomography. In addition, modern techniques such as NVidia PhysX and CUDA are used in current study. As the result, it is numerically shown that it is possible to apply the extended Kalman filter together with a real-time physics engine, known as PhysX, in order to determine the position of a moving object. It is shown that the position of the rigid body can be determined based only on reconstructions of its slices. However, the simulation of the body movement sometimes is subject to an error during Kalman filter employment as PhysX is not always able to continue simulating the movement properly because of incorrect state estimation.