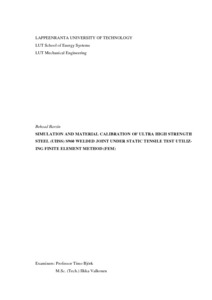 The aim of this work was to calibrate the material properties including strength and strain values for different material zones of ultra-high strength steel (UHSS) welded joints under monotonic static loading. The UHSS is heat sensitive and softens by heat due to welding, the affected zone is heat affected zone (HAZ). In this regard, cylindrical specimens were cut out from welded joints of Strenx® 960 MC and Strenx® Tube 960 MH, were examined by tensile test. The hardness values of specimens’ cross section were measured. Using correlations between hardness and strength, initial material properties were obtained. The same size specimen with different zones of material same as real specimen were created and defined in finite element method (FEM) software with commercial brand Abaqus 6.14-1. The loading and boundary conditions were defined considering tensile test values. Using initial material properties made of hardness-strength correlations (true stress-strain values) as Abaqus main input, FEM is utilized to simulate the tensile test process. By comparing FEM Abaqus results with measured results of tensile test, initial material properties will be revised and reused as software input to be fully calibrated in such a way that FEM results and tensile test results deviate minimum. Two type of different S960 were used including 960 MC plates, and structural hollow section 960 MH X-joint. The joint is welded by BöhlerTM X96 filler material. In welded joints, typically the following zones appear: Weld (WEL), Heat affected zone (HAZ) coarse grained (HCG) and fine grained (HFG), annealed zone, and base material (BaM). Results showed that:
The HAZ zone is softened due to heat input while welding. For all the specimens, the softened zone’s strength is decreased and makes it a weakest zone where fracture happens while loading. Stress concentration of a notched specimen can represent the properties of notched zone. The load-displacement diagram from FEM modeling matches with the experiments by the calibrated material properties by compromising two correlations of hardness and strength.