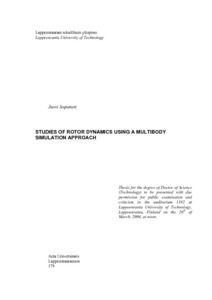 The non-idealities in a rotor-bearing system may cause undesirable subcritical superharmonic resonances that occur when the rotating speed of the rotor is a fraction of the natural frequency of the system. These resonances arise partly from the non-idealities of the bearings. This study introduces a novel simulation approach that can be used to study the superharmonic vibrations of rotor-bearing systems. The superharmonic vibrations of complex rotor-bearing systems can be studied in an accurate manner by combining a detailed rotor and bearing model in a multibody simulation approach.
The research looks at the theoretical background of multibody formulations that can be used in the dynamic analysis of flexible rotors. The multibody formulations currently in use are suitable for linear deformation analysis only. However, nonlinear formulation may arise in high-speed rotor dynamics applications due to the cenrrifugal stiffening effect. For this reason, finite element formulations that can describe nonlinear deformation are also introduced in this work. The description of the elastic forces in the absolute nodal coordinate formulation is studied and improved. A ball bearing model that includes localized and distributed defects is developed in this study. This bearing model could be used in rotor dynamics or multibody code as an interface elements between the rotor and the supporting structure. The model includes descriptions of the nonlinear Hertzian contact deformation and the elastohydrodynamic fluid film.
The simulation approaches and models developed here are applied in the analysis of two example rotor-bearing systems. The first example is an electric motor supported by two ball bearings and the second is a roller test rig that consists of the tube roll of a paper machine supported by a hard-bearing-type balanceing machine. The simulation results are compared to the results available in literature as well as to those obtained by measuring the existing structure. In both practical examples, the comparison shows that the simulation model is capable of predicting the realistic responses of a rotor system. The simulation approaches developed in this work can be used in the analysis of the superharmonic vibrations of general rotor-bearing systems.