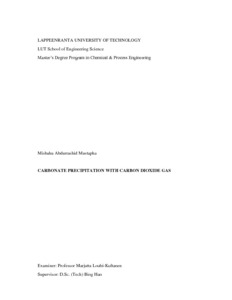 The aim of this thesis research work focused on the carbonate precipitation of magnesium using magnesium hydroxide Mg(OH)2 and carbon dioxide (CO2) gas at ambient temperature and pressure. The rate of dissolution of Mg(OH)2 and precipitation kinetics were investigated under different operating conditions. The conductivity and pH of the solution were inline monitored by a Consort meter and the solid samples gotten from the precipitation reaction were analysed by a laser diffraction analyzer Malvern Mastersizer to obtain particle size distributions (PSD) of crystal samples. Also the Mg2+ concentration profiles were determined from the liquid phase of the precipitate by ion chromatography (IC) analysis. Crystal morphology of the obtained precipitates were also investigated and discussed in this work.
For the carbonation reaction of magnesium hydroxide in the present work, it was found that magnesium carbonate trihydrate (nesquehonite) was the main product and its formation occurred at a pH of around 7-8. The stirrer speed has a significant effect on the dissolution rate of Mg(OH)2. The highest obtained Mg2+ concentration level was 0.424 mol L-l for the 470 rpm and 0.387 mol L-1 for the 560 rpm which corresponded to the processing time of 45 mins and 40 mins respectively. The particle size distribution shows that the average particle size keeps increasing during the reaction as the CO2 is been fed to the system. The carbonation process is kinetically favored and simple as nesquehonite formation occurs in a very short time. It is a thermodynamically and chemically stable solid product, which allows for a long-term storage of CO2.
Since the carbonation reaction is a complex system which includes dissolution of magnesium hydroxide particles, absorption of CO2, chemical reaction and crystallization, the dissolution of magnesium hydroxide was studied in hydrochloric acid (HCl) solvent with and without nitrogen (N2) inert gas. It was found on the dissolution part that the impeller speed had effect on the dissolution rate. The higher the impeller speed the higher the pH of the solution, although for the highest speed of 650rpm it was not the case. Therefore, it was concluded that the optimum speed of the stirrer was 560rpm. The influence of inert gas N2 on the dissolution rate of Mg(OH)2 particles could be seen based on measured pH, electric conductivity and Mg2+ concentration curves.