Optimization of PV and battery capacity for domestic purposes 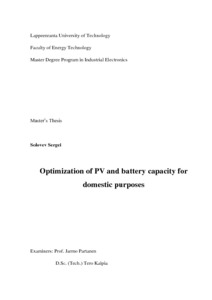 The usage of PV batteries nowadays became more and more widely spread. Due to the fact that the efficiency of modern PV is rising every year the prevalence of this source of energy is increasing. As the source of the energy is sunlight, these batteries need to be complimented by storage capacitors which will store energy for future use. Nevertheless the less the calculation of demanded amount of energy according the load and capacity of a storage battery that will keep the end consumer in work during certain time still is not overviewed. In this thesis the overall system will be considered and there will be made economic calculations for configurations of such system that will depend from the load. Also the behavior of the system in different geographical and climate conditions that influence of the amount of energy produced will be overviewed.